Children are the most wonderful gift we have - God does not make them "by accident"!  Each baby is crafted by his hand.  He loves all of us and cares for each one of us - so much that he knows how many hairs are on our head!  It makes the wonder of a child a true miracle.

Nationwide, over 35 million unborn babies have been killed in the nearly 25 years since abortion was legalized through the January 22, 1973 Supreme Court decision of Roe v. Wade. Today, in this country, an unborn child can be legally killed anytime throughout the entire nine months of pregnancy...because he or she may be unwanted, inconvenient, possibly imperfect, or even the wrong sex.

Each year, an estimated 1.5 million babies are killed by abortion, one baby every 20 seconds.  For more information on abortion procedures, please view:

Join us at Alabama State Health Department in Montgomery when we go to the Board of Public Health meeting that will consider our petition (also see our letter to the State Board of Health). For more information, contact us: Reverend James R. Henderson, Coordinator.  Email: mailto:emmanuel @hiwaay.net phone: (256) 337-0826 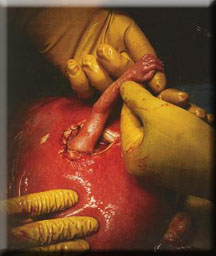 "Tiny Hand, Major Breakthrough: The skilled hands of surgeon Joseph Bruner lift the hand of a 21-week-old fetus during an operation at Nashville's Vanderbilt University Hospital in July. The pioneering in-utero procedure was to correct the effects of spina bifida, a condition in the spinal column in which one or more vertebrae — the bones that make up a backbone — fail to form properly.

This picture shows a 21-week-old fetus in its mother's womb, about to undergo a spine operation designed to save it from serious brain damage (by the way, at 21 weeks old, this baby could still be legally aborted). The baby is literally hanging on for life. For this is one of the most remarkable photographs taken in medicine and a record of one of the world's most extraordinary operations. The surgery was carried out entirely through the tiny slit visible in the wall of the womb and the `patient' is believed to be the youngest to undergo it."

Abortion Pros and Cons - Go to this link for ten "reasons" given by the Pro Abortion (Pro-Death) side of the issue and a truthful response that clearly shows that instead of supporting or justifying the killing of innocent life, these reasons, when truthfully presented, are 10 powerful arguments against abortion...just like the first list of ten. The pros are listed followed by the cons.

Our Mission brings you these Weekly Bible Verses

7 Then his sister said to Pharaoh's daughter, "Shall I go and call a nurse for you from the Hebrew women, that she may nurse the child for you?"

8 And Pharaoh's daughter said to her, "Go." So the maiden went and called the child's mother.

9 Then Pharaoh's daughter said to her, "Take this child away and nurse him for me, and I will give you your wages." So the woman took the child and nursed him.

10 And the child grew, and she brought him to Pharaoh's daughter, and he became her son. So she called his name Moses, saying, "Because I drew him out of the water."